We took a picture at our playgroup yesterday.  We met when our kids were just born.  Together, we complained about sleepless nights, watched first crawls, shared birthdays, stories, gripes, and advice.  And our kids have known each other since birth.  It has been 7 years that we have been meeting weekly.  That makes for some pretty good friends.  I’m glad we finally got a picture together. 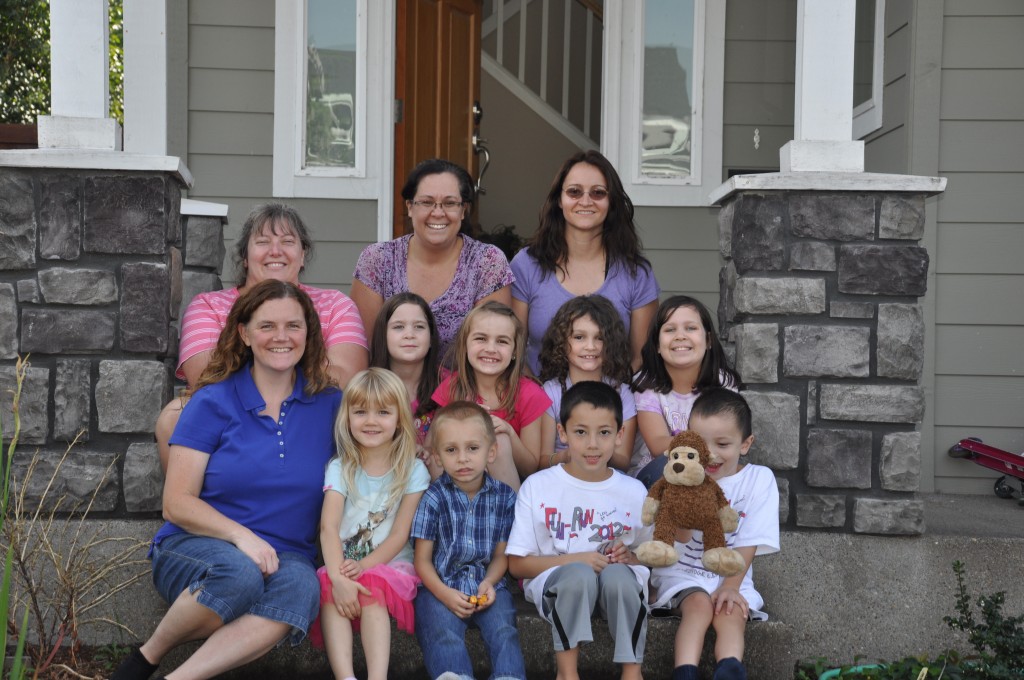 Well, we made it.  It was very close.   There was a flurry of last minute activity, running around town, and last night crafting but all projects were finished, all gifts given, and a few tears shed.  But it was good.

Kulia rocked Kindergarten.  I was overjoyed that she was placed in Mrs. Derry’s class.  Leina had loved it and I knew it would be a good fit for Kulia.  Boy was I right!  Kulia looked forward to every single day of school and came home full of happy chatter and proudly displayed worksheets.  The end of this year was a bit sad.  I wish I had another McL waiting in the wings.  I’d love another year of hanging with Jenny.  She is beyond fabulous.

And, of course, no year would be complete without good friends.  Kulia’s very best friend from preschool was in her class this year and the girls were inseparable.  Emily finds Kulia uproariously hilarious and Kulia adores Emily’s sense of adventure and imagination.  They are a very, very good match.  I hope we get lucky and have Em in our class next year too!

Kulia also made a lots of new friends.  On her first day of school, she sat next to a sweet little girl named Payton.   That first new friend is so special.  Payton has an older sister so every day when we went to pick up Leina, Kulia and Payton would run around the front lawn together like the wild kids they are.  Never once did Kulia bemoan the fact that we had to get Leina.  She was always excited because she knew Payton would be there.  Her other good buddy is Julianne.  They are in a dance class together and have such fun working on all their steps.  Both girls are sweet, kind, funny and smart.  Just the type of girls I love to have around!  Kulia picks very very good friends.

Leina’s year was a bit rougher.  First grade started out hard.  None of her friends from last year were in her class.   Her teacher was 8 months pregnant on the first day of school and they didn’t know who would be subbing during maternity leave.   I was worried.  But, as it often does, what looks at first like disaster turned out to be better than ever!  The school managed to find the most fabulous and wonderful substitute teacher!  Mrs. Taylor was crazy and wild and full of ideas and energy.  She had big plans and loved a class that was loud and creative.  The kids adored her.  She was like something out of a movie.  While every other class was bent of worksheets in silence, Mrs. Taylor would toss them aside and decide on something totally inventive and fun.  Awesome.  Every Friday I helped out in the classroom and every Friday I was blown away by what she could accomplish.  Even better, after maternity leave was over, the two job shared so the kids got to keep their beloved sub right through to the end.  The only sad bit is that next year, Mrs. Taylor won’t be there.  So our end of the year farewell was a bit hard to swallow.

Mrs. Machan was the exact opposite.  Her classroom was quiet and orderly.  She had a ton of tricks to settle the kids and taught them countless songs about colors and numbers.  I didn’t get to know her as well as I would have liked since she was out on leave for more than half of the year.  I’m secretly hoping Kulia is placed in her class next year so I can get another shot.  But, when she was there, she really managed to teach those kids a ton and Leina adored her.

Friends were hard for Leina this year.  Many days, she came home in tears with stories of feeling alone.  She excelled in the classroom but felt lost on the playground.  She wanted her old friends and seemed lost on how to make new ones.  And then.  Somehow.  It happened.  About half way through the year, she found her group.  They were silly, silly girls who all loved Pokemon, drawing, singing songs, and teasing boys.  Perfect.  On the last day, Leina broke down crying again but this time it was at the thought of leaving behind these hard won friends.  I don’t blame her!  Here are all the girls in her class.  Sweet and silly!

I am almost too tired to Blog. I had totally forgotten how exhausting a wedding can be. Only this time, I don’t get a week in Hawaii to recharge. Grrrrr. All went well and the newlyweds have ridden off into the Tahitian sunset. All that’s left is to return the tuxedoes, the dresses, the slip, clean the reception site, drop of the presents, water the plants, and feed the dog. We haven’t gotten to bed before 2am the last four days and it’s taking a toll. We’re turning into old fogies.

The sad part is, I was so busy running errands that I didn’t get any wedding cake and missed all the dancing except for the first dance. Never even got to see the bubble machine.

I have no cool links for you today. Even my baby carrots have failed to perk me up. I’m thinking about investing in some concealer since everyone I have seen today has commented on the bags around my eyes.

Actually, I think the best part was after the wedding was over and I could hang out with old friends I hadn’t seen in far too long. All in all, two thumbs up!

My best friend is getting married tomorrow. I’m so excited. It’s a fairy tale really. She met her fiance at our wedding. She was my bridesmaid and he was Kev’s groomsman. It was so romantic. I must say it is awfully nice when best friends fall in love. They are ablsolutely perfect for eachother. Last night was the bachelor/bachelorette party. My poor little house was packed to the brim with laughing women. Kat’s family is an absolute blast. I was surprised the neightbors didn’t call the cops we were so loud. Don’t know exactly what the men did except Kevin staggered home around 1:30am bleary eyed, smelling of smoke, with a ton of chinese food. He muttered “don’t touch me, I’m disgusting” and trotted off to take a shower. I’m thinking they were up to no good. That’s ok ’cause us girls had a blast. Can’t wait for the wedding itself. The DJ comes with a bubble machine. Ohhhhh, ahhhh oooooooh.

Wow, my first wedding where I can’t try and catch the bouquet. Doesn’t that mean I get 2 pieces of cake to make up for that? Yep, I think that’s definately the rule.

This was sent to me by my old friend Alicia – she gets the funniest stories and is kind enough to send them out. I felt it was necessary to preserve this priceless information for future generations of men. Also, next time Kevin needs help, he can always boot up the computer and recheck this handy guide.

FINE
This word is used at the end of any argument that we feel we are right about but need to shut you up. NEVER use fine to describe how a woman looks. This will cause you to have on of those arguments.

FIVE MINUTES
This is half and hour. It is equivalent to the five minutes that your football game is going to last before you take out the trash, so I feel that it’s an even trade.

NOTHING
This means something and you should be on your toes. “Nothing” is usually used to describe the feeling a woman has of wanting to turn you inside out, upside down, and backwards. “Nothing” usually signifies an arguement that will last “Five Minutes” and end wih the word “Fine”.

GO AHEAD (with raised eyebrows)
This is a dare. One that will result in a woman getting upset at “Nothing” and will end with the word “Fine”.

GO AHEAD (normal eyebrows)
This means “I give up” or “do what you want because I don’t care”. You will get a raised eyebrow “Go Ahead” in just a few minutes, followed by “Nothing” and “Fine” and she will talk to you again in about “Five Minutes” when she cools off.

LOUD SIGH
This is not actually a word, but is still often a verbal statement commonly misunderstood by men. A “Loud Sigh” means she thinks you are an idiot at that moment and wonders why she is wasting her time standing there and arguing with you over “Nothing”.

SOFT SIGH
Again, not a word, but a verbal statement. “Soft Sighs” are one of the few things that some men actually understand. She is content. Your best bet is to not move or breathe and she will stay contant.

OH
This word as the lead to a sentence usually signifies that you are caught in a lie. Example, “Oh, I talked to him about what you were doing last night.” Do not try to lie more to get out of it, or you will get raised eyebrows “Go Ahead” followed by acts so unspeakable that I can’t bring myself to write about them.

THAT’S OK
This is one of the most dangerous statements that a woman can say to a man. “That’s OK” means that she wants to think long and hard before paying you retributions for whatever it is that you have done. “That’s OK” is often used with the word “Fine” and used in conjunction with a raised eyebrow “Go Ahead”. At some point in the near future when she has plotted and planned, you are going to be in some mighty big trouble.

PLEASE DO
This is not a statement, it is an offer. A woman is giving you the chance to come up with whatever excuse or reason you have for doing whatever it is that you haver done. You have a fair chance to tell the truth, so be careful and you shouldn’t get a “That’s OK”.

THANKS
A woman is thanking you. Do not faint, just say you’re welcome.

THANKS A LOT
This is much different than “Thanks”. A woman will say, “Thanks A Lot” when she is really ticked off at you. It signifies that you have hurt her in some callous way and will be followed by the “Loud Sigh”. Be careful not to ake what is wrong after the “Loud Sigh”, as she will only tell you “Nothing”.