Parenting consists of choosing between three options:  laughing, crying, and fighting the desire to rage quit.  (Or at least that’s how it seems to me.)  So I relish every opportunity I get to laugh.

Leina’s science teacher gave them the assignment to write a letter to their parents expressing how they are doing in the class.  The students were to assess their work and reflect on the following: their effort so far, good behaviors, and areas of improvement.  Seems benign enough, right?  Unfortunately, the teacher was a bit rushed and didn’t have time to review all of their work.  If the student was happy with what they wrote, they were given the option to sign, seal and address the letter to their parents themselves without the teacher proof reading their report.

Below is a faithful copy of the letter I received from my child.  Enjoy it.  I know I did. 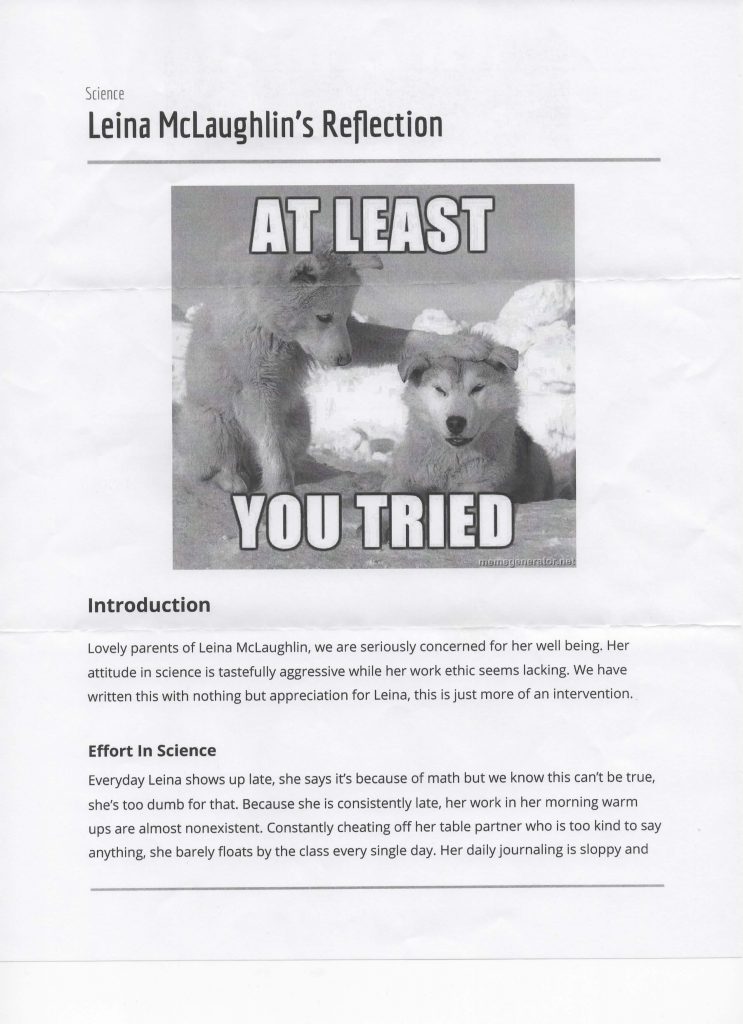 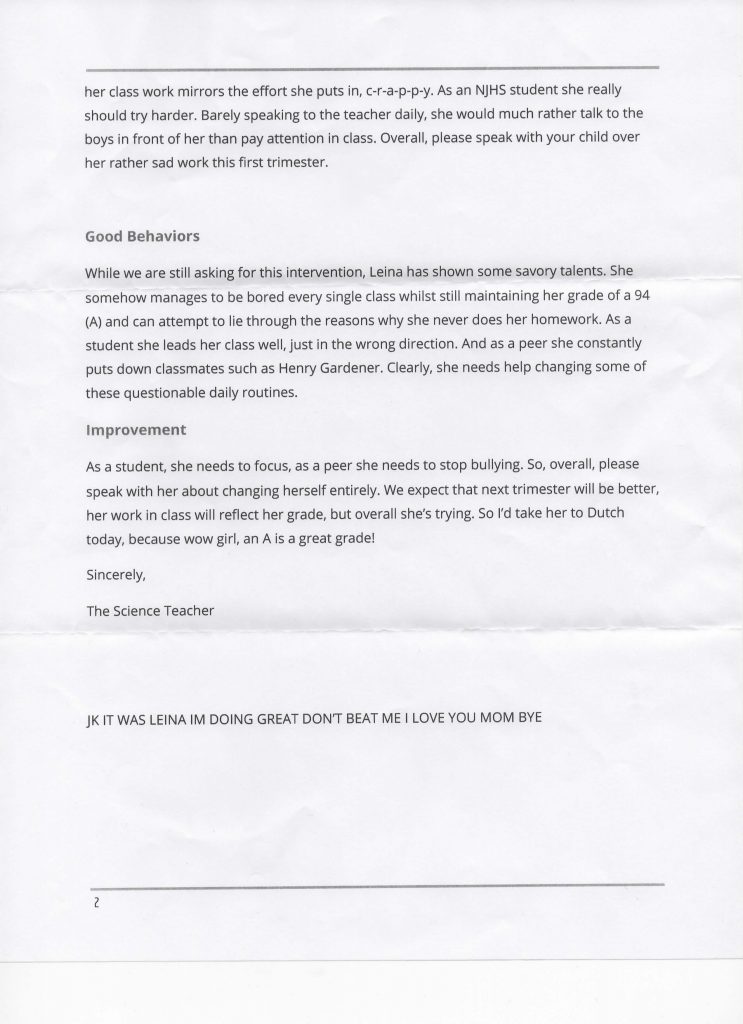 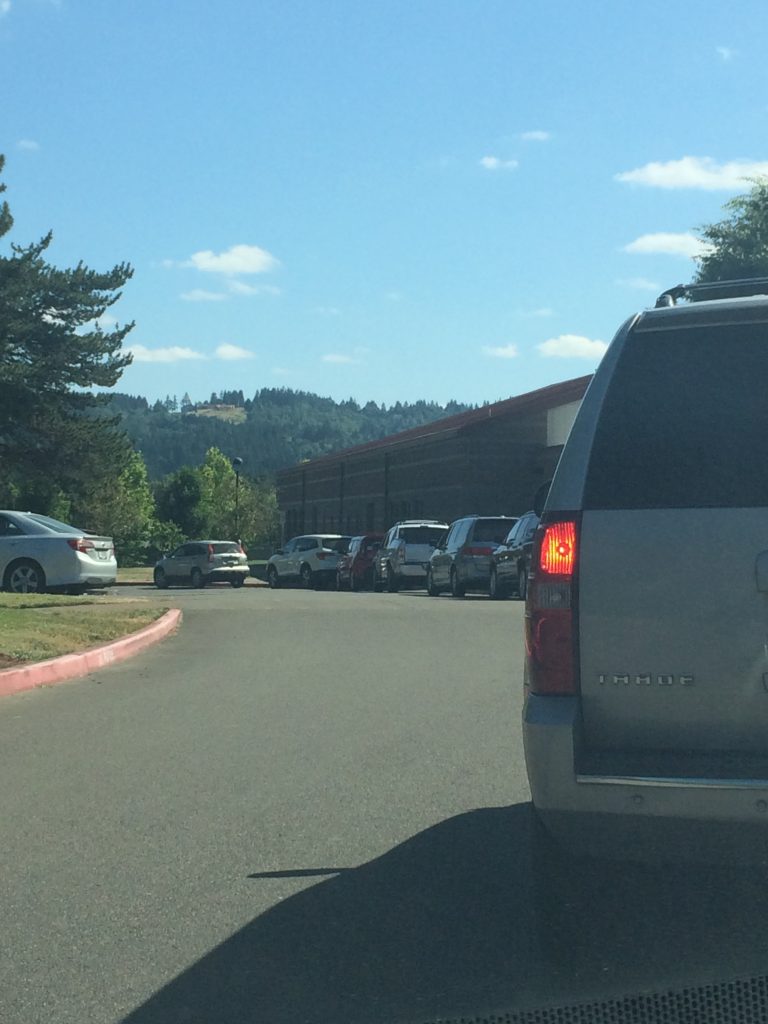 Most days, this is where you will find me.  Waiting in line.  Drop off line, pick up line, in front of a house, or across from a gym.  It used to irk me to no end, all this time spent sitting in my car, parked by a curb.  But humans are amazingly adaptable creatures.  Rather than rail against my fate, I decided to embrace it.  I have a book stashed in my driver door (Hyperion by Dan Simmons).  Snack are located in the center console (dried nut mix from Costco).  Make up bag is on hand to pimp myself out if I ran out of the house in a blind panic because I lost track of time (lets be honest, this is most days for me).  And a small sketch book and pen set if I’m near something sketch worthy.  Add to that a few podcasts pre-downloaded and ready to enjoy (Hello From the Magic Tavern), and what was initially mind numbing boredom becomes wonderful relaxation.  Open the sunroof, lower the windows and enjoy holding still for a moment.  Sometimes, waiting can be lovely too. 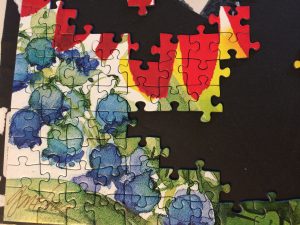 Confession time. I love puzzles. Love ’em. When I was a kid, we used to go visit my Grandparents who lived in a retirement community in Sun City, Arizona. Now, if you are a kid in a retirement area, it can be a bit slow. Luckily, my grandparents had two things going for them. One, a community pool. And two, a library that rented out puzzles. Every visit, my grandmother would go and get a puzzle for us. I remember pouring over the pieces on her dining room table waiting out the hot Arizona afternoon. I think that’s when my puzzle love began in earnest. 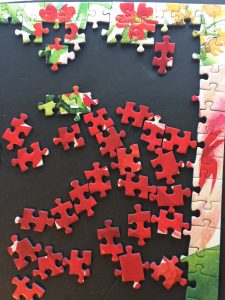 You open the box and are faced with a jamble of pieces, colors and shapes.  It all seems impossible but every child knows that the trick is to start small.  Find the corners.  Pick out the edge pieces.  Once that frame is assembled you have a toe hold on the beast and suddenly the impossible seems within reach.

There are different techniques after the beginning frame out is over.  You can sort by color or unique image.  From there expand into grouping by shape.  And the satisfaction of finding that one last piece to complete a section!  Ummmmm.   Makes me tingly happy just thinking about it. 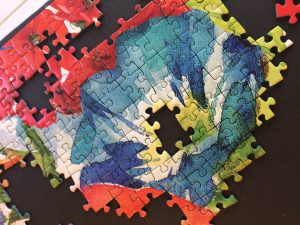 Oddly enough, I don’t like to do a puzzle more than once.  Instead, I grab my ModPodge and glue the finished piece together and hang it up.  A reminder that no matter how broken something is, if you frame it carefully and work on it bit by bit, you can make it whole again. 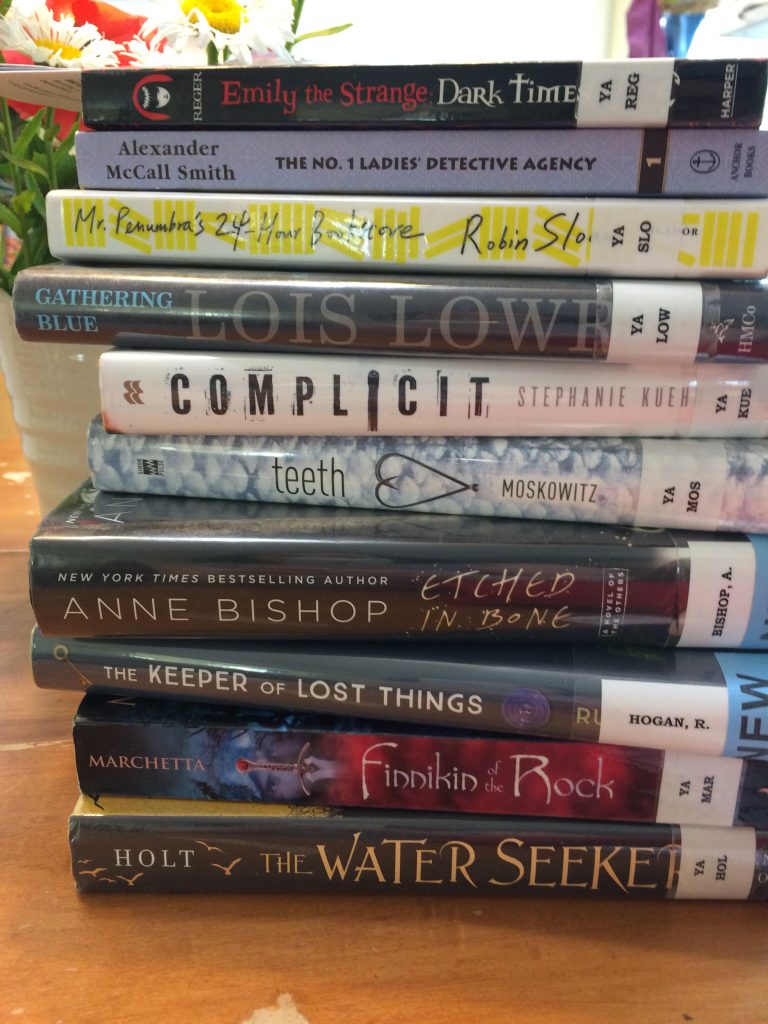 Argument:  There is nothing to do.  I’m bored.

Negative Rebuttal:  I don’t have any books.  I’ve read them all.  I’m so bored I’m going to die.

Winning Response:  Get in the car.  We are going to the library.

Yes, every mother’s secret weapon.  The scourge of bored children everywhere.  The Library.

Lined with beautiful books that you can grab and go.  Looks interesting?  Grab it.  Back blurb got you curious? Add it.  Author you like? Stack it.

And the beauty of it all, you get to walk out with them for nothing.  So if it is a dud, no worries.  You can return it no questions asked.  But if you love it, if it opens new worlds for you, you can go back for more.  And more.  And more!  Is there anything better than a summer spent reading library books?  Debatable.

Summer is upon us and it is time to fight the yearly battle of the electronics.  This is a fight for which I have no childhood reference.  As a kid, there were Saturday morning cartoons but that was pretty much it.  By noon, your only choices were infomercials or old black and white movies.  No streaming services, no endless cable channels, no YouTube content.  Whether you wanted it or not, you had to find something else to do other than veg out in front of a screen.  So I don’t remember arguing with my parents over the appropriate amount of screen time.  I was never ordered to unglue myself from my phone and get outside.  I do remember being bored and wandering around the neighborhood or setting up a tent and binge reading library books.  I remember fighting with my sister  and inventing wildly elaborate games together.  Summer was a slow and unsupervised time when I was a kid.  Oh how times have changed.

Given a chance, my kids would want to spend every minute of summer online.  Either playing video games, streaming shows, or scrolling through Instagram and Snapchat feeds.  Books? Outside? Games?  Um, no thanks.  Super boring.  Not interested.  But as a parent we are constantly being lectured to “restrict screen time.”  And so the summer compromising begins.  I’ve tried charts and “earning” time, I’ve tried brides and cajoling.  Ever method pretty much fails eventually and  I end up with kids sneaking their electronics and trying to hide from me all summer long.  It isn’t pretty. 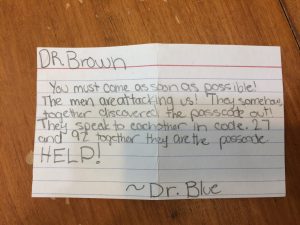 So this year, we’re trying something a little new.  Part binge.  Part purge.  From the moment they wake up until lunch time, they are free to do whatever they want.  No time restrictions.  They can binge their little online addicted hearts out.  But after lunch, they are cut off.  Nothing but boredom and summer doldrums for the afternoon.  The usual mopping and plaintive laments of being “literally bored to death” occurs but I can counter with 1. You are not actually dead so stop misusing the term “literally” and 2. You had all morning to gorge so I feel no sympathy for you.  And the results?  Amazing.

Yesterday, Leina decided to make her very own room escape for the family.  She spent the afternoon devising clues, codes, and a backstory for us.  It was awesome and fun and just the perfect way to while away a long summer afternoon.  Kulia grabbed a book she had been meaning to read and headed outside.  She lolled on the lounger, lay in the grass, moved back to the shade and just read and read and read.   It warmed my maternal heart to see her out there.  And of course, I have a stack of games just dying to be played.  Now, after lunch, I have two willing victims wandering about the downstairs.   Muwahahahaha.

It is early days, but I’m hopefully we have finally achieved the summer electronic compromise of my dreams.  Only time will tell, but so far, the outlook is good. 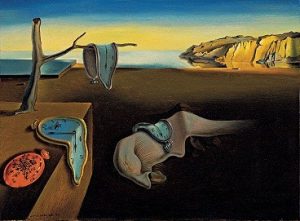 The Persistence of Memory By Salvador Dali. Image taken from About.com, Fair use, https://en.wikipedia.org/w/index.php?curid=20132344

I went down to the school to teach an art class on Salvador Dali to a group of 3rd graders.  Of course, I showed them his well known painting with the melting clocks.  To us old folks, the idea of time slipping away is something of which we are very cognizant.  But I couldn’t help but wonder what a group of eight year olds would make of the idea of time slowly running out.

“Remember when school first started?” I asked them.  “Bringing in your supplies, meeting your teacher, learning who you were going to sit by. Does that seem like a long time ago?”  Heads nodded and I saw their eyes drift as they looked back to the start of they year.

One little girl in the back cocked her head to the side and commented, “Yeah, but it also seems like just yesterday.”  More nods of agreement floated across the room. 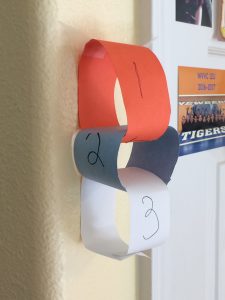 “That’s so weird,” said a little boy in front, “it’s like long ago but also just over.  I think I get the clocks.”  That crazy sense of the past being right there next to you is present even when young I guess.  The end of Kindergarten sits snuggled up right next to the end of 6th grade in my mind.  My girls are equally tiny little things and then almost grown women.  And trying to wrap my head around how long it has been and how quickly it has flown is almost impossible.

As the countdown to summer draws to a rapid close, I can’t help but wonder where did the elementary years go?  How are we suddenly almost finished with middle school?  I’m worried that my clocks are melting at an alarming rate.  Climate change on an internal scale?  Is that a thing?  Lets hope not…..